Be careful of the following common errors when describing changes in numbers.

The charts summarise the weight measurements of people living in Charlestown in 1955 and 2015. 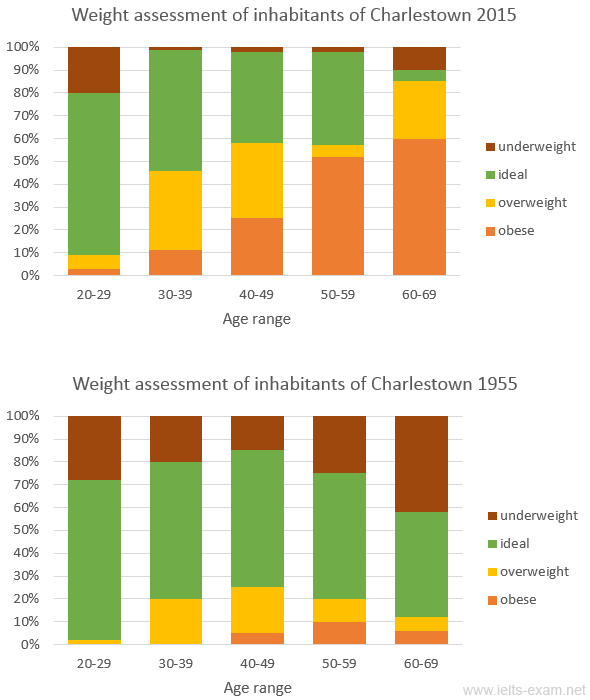 Read the model answer below, and choose the correct alternative for each gap.

The charts provide an analysis of the weight issues among the residents of the town of Charlestown in 1955 and in 2015.

In 1955, the youngest age group had the fewest of weight issues, with more than 70% of 20-29-year-olds being assessed as having a healthy weight. In the same year, excess weight was only a significant problem among 40-49-year-olds, 20-30% of whom were classified as either overweight or obese. In fact, being underweight was a more significant problem affecting more than twenty of each age group, and the elderly in particular, with 40% of the over 60s being classified as underweight.

In stark contrast to this, 2015, being underweight was only a problem among 20-29-year olds, with 20% obtaining this diagnosis, and the number of underweight elderly people had fallen 10%. The charts clearly show that, in modern times, obesity poses a considerable problem from the age of 30 upwards. In fact, there was a increase in this problem in almost every age group over 29 until the age of 60, when the vast majority are considered to have an unhealthy weight. It is important to note that, by the age of 60, less than 50% of each age group was considered to have a perfect weight by the year 2015. This is a fall 10% compared the same age group in 1955.

When the two years, it is clear that there has been a significant increase the number of obese people in Charlestown, and there was a general drop the number of underweight people between 1955 and 2015.