The US City and the Natural Environment 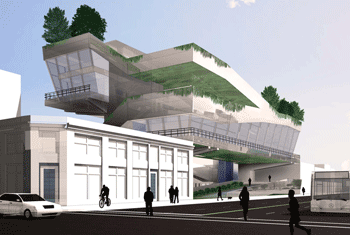 A) While cities and their metropolitan areas have always interacted with and shaped the natural environment, it is only recently that historians have begun to consider this relationship. During our own time, the tension between natural and urbanized areas has increased, as the spread of metropolitan populations and urban land uses has reshaped and destroyed natural landscapes and environments.

B) The relationship between the city and the natural environment has actually been circular, with cities having massive effects on the natural environment, while the natural environment, in turn, has profoundly shaped urban configurations. Urban history is filled with stories about how city dwellers contended with the forces of nature that threatened their lives. Nature not only caused many of the annoyances of daily urban life, such as bad weather and pests, but it also gave rise to natural disasters and catastrophes such as floods, fires, and earthquakes. In order to protect themselves and their settlements against the forces of nature, cities built many defences including flood walls and dams, earthquake-resistant buildings, and storage places for food and water. At times, such protective steps sheltered urbanites against the worst natural furies, but often their own actions – such as building under the shadow of volcanoes, or in earthquake-prone zones – exposed them to danger from natural hazards.

C) City populations require food, water, fuel, and construction materials, while urban industries need natural materials for production purposes. In order to fulfill these needs, urbanites increasingly had to reach far beyond their boundaries. In the nineteenth century, for instance, the demands of city dwellers for food produced rings of garden farms around cities. In the twentieth century, as urban populations increased, the demand for food drove the rise of large factory farms. Cities also require fresh water supplies in order to exist – engineers built waterworks, dug wells deeper and deeper into the earth looking for groundwater, and dammed and diverted rivers to obtain water supplies for domestic and industrial uses. In the process of obtaining water from distant locales, cities often transformed them, making deserts where there had been fertile agricultural areas.

D) Urbanites had to seek locations to dispose of the wastes they produced. Initially, they placed wastes on sites within the city, polluting the air, land, and water with industrial and domestic effluents. As cities grew larger, they disposed of their wastes by transporting them to more distant locations. Thus, cities constructed sewerage systems for domestic wastes. They usually discharged the sewage into neighbouring waterways, often polluting the water supply of downstream cities.

The air and the land also became dumps for waste disposal. In the late nineteenth century, coal became the preferred fuel for industrial, transportation, and domestic use. But while providing an inexpensive and plentiful energy supply, coal was also very dirty. The cities that used it suffered from air contamination and reduced sunlight, while the cleaning tasks of householders were greatly increased.

E) In the late nineteenth and early twentieth centuries, reformers began demanding urban environmental cleanups and public health improvements. Women's groups often took the lead in agitating for clean air and clean water, showing a greater concern than men in regard to quality of life and health-related issues. The replacement of the horse, first by electric trolleys and then by the car, brought about substantial improvements in street and air sanitation. The movements demanding clean air, however, and reduction of waterway pollution were largely unsuccessful. On balance, urban sanitary conditions were probably somewhat better in the 1920s than in the late nineteenth century, but the cost of improvement often was the exploitation of urban hinterlands for water supplies, increased downstream water pollution, and growing automobile congestion and pollution.

F) In the decades after the 1940s, city environments suffered from heavy pollution as they sought to cope with increased automobile usage, pollution from industrial production, new varieties of chemical pesticides and the wastes of an increasingly consumer-oriented economy. Cleaner fuels and smoke control laws largely freed cities during the 1940s and 1950s of the dense smoke that they had previously suffered from. Improved urban air quality resulted largely from the substitution of natural gas and oil for coal and the replacement of the steam locomotive by the diesel-electric. However, great increases in automobile usage in some larger cities produced the new phenomenon of smog, and air pollution replaced smoke as a major concern.

G) During these decades, the suburban out-migration, which had begun in the nineteenth century with commuter trains and streetcars and accelerated because of the availability and convenience of the automobile, now increased to a torrent, putting major strains on the formerly rural and undeveloped metropolitan fringes. To a great extent, suburban layouts ignored environmental considerations, making little provision for open space, producing endless rows of resource-consuming and fertilizer-dependent lawns, contaminating groundwater through leaking septic tanks, and absorbing excessive amounts of fresh water and energy. The growth of the outer city since the 1970s reflected a continued preference on the part of many people in the western world for space-intensive single-family houses surrounded by lawns, for private automobiles over public transit, and for the development of previously untouched areas. Without better planning for land use and environmental protection, urban life will, as it has in the past, continue to damage and stress the natural environment.