A line graph shows how the value of something changes over time. The vertical axis shows quantities, e.g. numbers, percentages or money. The horizontal axis shows different points in time, usually months or years. Different quantities measured at different points in time can be joined using a continuous line to show a trend or how these quantities change, e.g. increase, decrease, or stay the same. More lines (different colours or styles) can be used for different categories. The key explains which categories are being measured.

The line graph gives information about the number of Iranian, Greek and Turkish students who enrolled at Sheffield University between 2005 and 2009. 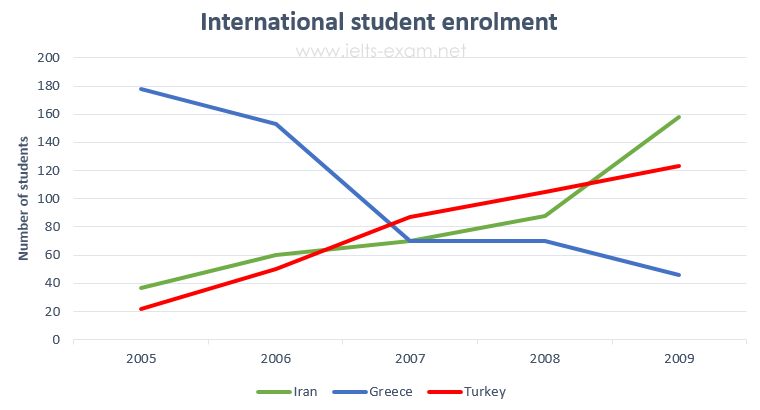 Iranian numbers grew steadily up to 2008 followed by a sharp rise reaching almost 160 students in 2009. Similarly, numbers of Turkish students showed steady growth throughout the period from about 20 in 2005 to over 120 in 2009. In contrast, enrolments of Greek students decreased dramatically from a high of 180 students in 2005 to just about 70 in 2007. Numbers then levelled off throughout 2007 finally dropping again to a low of around 45 in 2009. A further point of interest is that from 2007 to 2008, enrolments from all three countries were very similar, the average difference being approximately 20 students.

Overall, the graph highlights a considerable difference between growth in Iranian and Turkish enrolments but reduction in Greek enrolments.