When describing visual information in Task 1, it is important to think about what tenses you will need. If the diagram includes time references (dates, years) you will need a range of past and present tenses. If the graph has no past time reference, you will need to use the present simple tense only.

The graph below shows female unemployment rates in each country of the United Kingdom in 2013 and 2014. 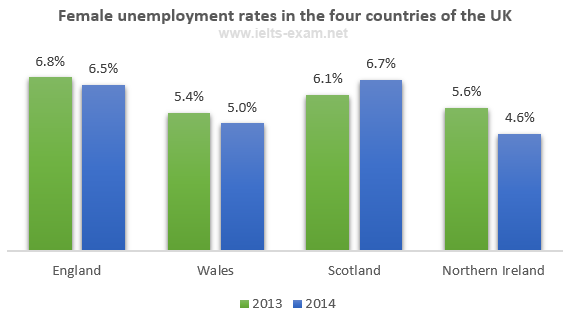 England had the greatest percentage of unemployed women in 2013, with 6.8%. However, this decreased by 0.3% in 2014. Lastly, Scotland was the only country which had an increasing percentage of unemployed women. In 2013, it had 6.1% of women out of work. This increased to 6.7% in 2014, making it the country with the highest female unemployment rate of the four countries.