This task requires you to present arguments in a clear, persuasive and well-organised way.

The map below is of the town of Garlsdon. A new supermarket (S) is planned for the town. The map shows two possible sites for the supermarket. 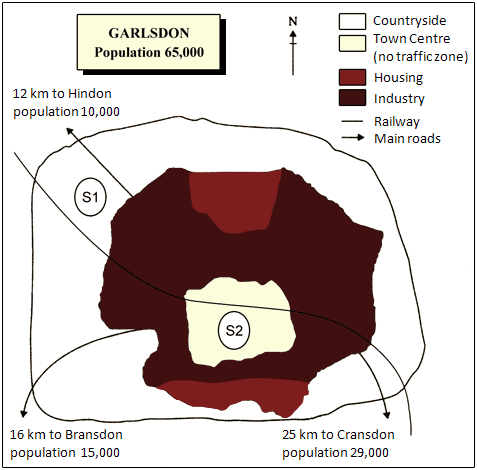 The map shows two proposed locations for a new supermarket for the town of Garlsdon.

The first potential location (S1) is outside the town itself, and is sited just off the main road to the town of Hendon, lying 12 km to the north-west. This site is in the countryside and so would be able to accommodate a lot of car parking. This would make it accessible to shoppers for both Hindon and Garlsdon who could travel by car. As it is also close to the railway line linking the two towns to Cransdon (25 km to the south-east), a potentially large number of shoppers would also be able to travel by train.

In contrast, the suggested location, S2, is right in the town centre, which would be good for local residents. Theoretically the store could be accessed by road or rail from the surrounding towns including Bransdon, but as the central area is a no-traffic zone, cars would be unable to park and access would be difficult.

Overall, neither site is appropriate for all the towns, but for customers in Cransdon, Hindon and Garisdon, the out-of-town site (S1) would probably offer more advantages.